The reputation of French filmmaker Jean Vigo is built on the slightest of canons, with the young director making just four films – only one feature-length – and dying aged 29 from rheumatoid septicaemia contracted during filming. L’Atalante (1934), the film that emerged, was mutilated and rendered unrecognisable by paranoid producers, and closed within two weeks of release, presumably to sink without trace. However, decades later, Vigo is hailed as a visionary and pivotal member of the cinematic avant-garde, and L’Atalante ranks highly on innumerable “best film” lists, with homage paid in the works of Francois Truffaut, Jean-Luc Godard and the Nouvelle Vague movement as a whole. Now, at last returned to the form its director intended, L’Atalante is showing at the BFI Southbank, bidding to feature on Sight and Sound’s “Greatest Films of All Time” poll for 2012.

"Bridging the gap between 1920s surrealism and 1930s poetic realism, L’Atalante has a delicate simplicity rarely seen in modern cinema"

Bridging the gap between 1920s surrealism and 1930s poetic realism, L’Atalante has a delicate simplicity rarely seen in modern cinema. Set on a grubby barge traversing the canals of Northern France, it stars Jean Dasté and Dita Parlo as Jean and Juliette – a sea captain and his new wife – who, innocent, inexperienced and barely knowing each other, are embarking tentatively on their married life, accompanied by drunken barge-hand Père Jules, a cabin boy and innumerable cats. As the boat chuggs along the Seine, Vigo tracks the clumsiness, the ecstasies, the anxieties and tenderness of a very human love affair, without once having recourse to high flown rhetoric or melodrama. Instead, the awkward pleasures of a wedding night, Juliette’s irritation at being cooped up, Jean’s jealous rages, the lovers’ separation and eventual rapprochement are all captured with a masterful lightness of touch, rendered against the claustrophobia of the barge, the bright lights of Paris and the quizzical gaze of le Père Jules, who, with a belly full of wine and a kitten on his shoulder, works to reunite the couple in the end.
This is a film about the most prosaic of subjects, yet one that sings with the poetry of human truth, playing on tiny details that speak volumes more than the most grandiose dialogue. Jean and Juliette are a lowly pair, country folk bowled over by their desperate love for each other, and this desperation is shown in petty squabbles, stubbornness and impotent rages rather than verbose speeches. When his young wife runs off to see Paris, Jean calls her bluff and sets sail for Le Havre, leaving her to fend for herself. Rage cooled, their mutual agonies of separation are exquisitely portrayed: in a dreamlike underwater scene, a miserable Jean sees his wife’s figure swirling before his eyes, and, in a sequence of breathless eroticism, Vigo runs parallel shots of Jean and Juliette each dreaming of the other in their separate beds. This provincial pair are raised to the sublime by the purity of their feelings and actions, irrespective of their modest surroundings. At the end when, reunited, they fall to the floor in a joyous clumsy embrace, it is a timeless reminder that the picturesque Hollywood ending is not as romantic as a truthful, heartfelt depiction of what people really do.
L’Atalante is at the BFI Southbank until March 1 2012, and at selected cinemas nationwide until March 16.
(reading Tish Wrigley at anothermag.com) 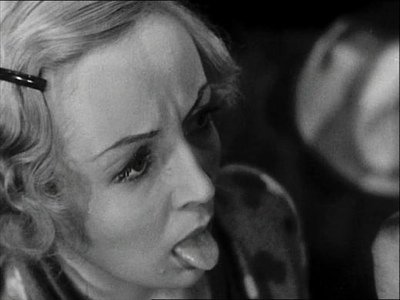 Posted by Patrizia Silingardi at 11:14 AM